Get fresh music recommendations delivered to your inbox every Friday.

by The Great Harry Hillman 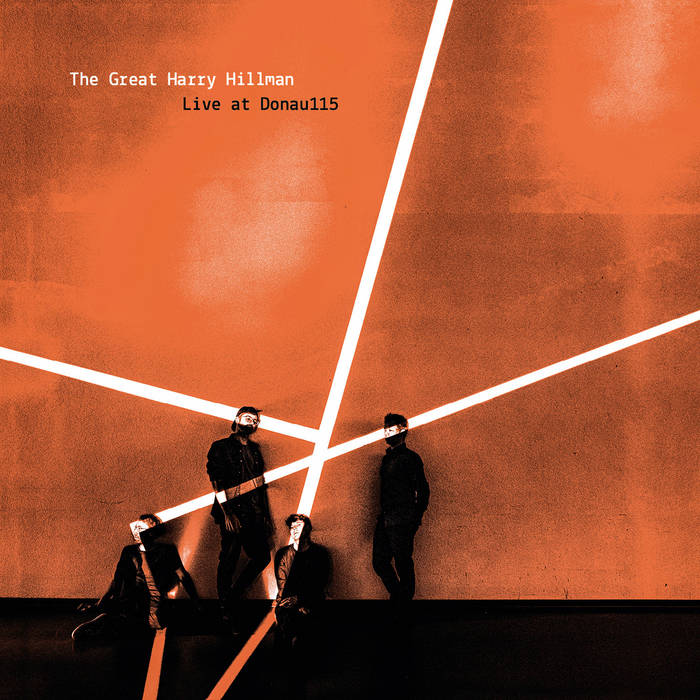 When a record is referred to as cinematic what this usually means is that the music has something sweeping, epic and larger than life about it. Live At Donau115*, the fourth full-length release from Swiss post-jazz quartet The Great Harry Hillman, is also very filmic, but not in that big silver screen sort of a way. Instead, what it evokes is the institution of the arthouse cinema, the mercurial space where underground, experimental films are incubated. Where the language of film is abstracted, deconstructed and appreciated for what it is, without it having to adhere to calcified, functional blueprints designed and streamlined to serve the needs of standard narrative structures.

After 11 years of playing live shows all over the place, we developed a very unique way of how we interact with each other in a live setting. We stopped playing with a setlist and starting improvising the order of our tunes and the transitions between them. - TGHH

Listening to these seven songs is very much like watching a compilation of Stan Brakhage experiments. Colourful, amorphous things appear, flicker and pulse. The textures, the scratches, the paint on the celluloid and the amplified film grain become the very point of the work, a collection of visual poems – beautiful and open to interpretation like a Rorschach test. What’s amazing is that the band painted these moving pictures in real time. A progression of ephemeral scenes resulted from free improvisation around themes lifted from previously written compositions, alloyed with the energy which was latent at the venue during the performance. You can almost hear them mining for this energy and transforming it through intense dialogue into a hypnotic reverie – tactile and textured sonics, teetering between the lyrical and caustic noise.

We come together to rehearse two to three times in a year. Usually, everyone brings some new material with them. We improvise around these ideas until we all know what each new tune is about. When that’s the case then we can set the song free on stage and it can change its state every night, but without losing its core identity. - TGHH

There are also moments on this record – though they are few and fleeting – where there is a clear shift away from mere abstraction towards the formally familiar. Something reminiscent of retro jazz (whether fusion or traditional) might cut through a composition like a flash frame or what feels like a perpetual zoom might slowly cross fade into a montage sequence based around a strong Americana twanged theme. But like in a David Lynch film these moments are the definition of uncanny. Rife with atmosphere and utterly surreal, as if what is off-frame has equal importance to what was readily apparent and was interfering with the main signal, distorting it just a pinch. It’s safe to say that The Great Harry Hillman make music which is layered literally and figuratively, very much like a short film based on multiple exposures.

The Band is the concept. The way we are and the way we feel. Every show is like a mixture of the four of us. We often hear that our music sounds cinematic, but we don‘t shoot for that. - TGHH
——————————
*Live At Donau115 is a document of a band achieving that telepathic level as an improvisatory unit. Their chemistry is impeccable, marked by a sensitivity to each other’s playing and the ability to channel the emotional truth of the moment. The material found here was recorded live at club Donau115 in Berlin. The band played three consecutive concerts in three days, out of which the last two were selected for this release.

The Great Harry Hillman is a Swiss post-jazz quartet, which has been playing together for twelve years. Their music combines jazz, rock, and improv into a subdued, layered, yet thrilling sound – quiet but powerful, played by four thoughtful musicians who are more than capable of rocking out when they feel like it. ... more

Bandcamp Daily  your guide to the world of Bandcamp

Kari Faux drops off her deluxe album 'Lowkey Superstar' plus tunes by Shunaji and Samplelov.